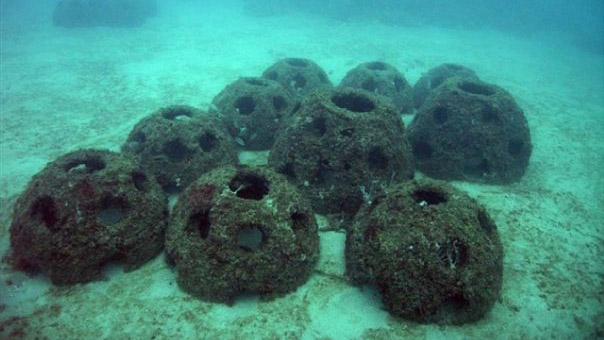 Eternal Reefs began simply. In the late 1980s, a pair of college roommates from the University of Georgia often went diving off of the Florida Keys on breaks. Over the years of diving, they saw significant deterioration and degradation of the reefs they were visiting. Don Brawley, founder of Eternal Reefs, realized the reefs needed help. A decision was made to do something about the reefs’ declining health. Once the friends were out of school, they began to talk about how they could contribute and help protect and restore these fragile ecosystems. Creating a material and system that would replicate the natural marine environment that supports coral and microorganism development was what they decided to do. And thus, the concept of the reef ball was formed – to directly rehabilitate and rebuild the dying reefs and in turn, add new habitat to the marine environment.

They faced two primary design challenges. Stability would be crucial and they needed to naturally attract marine life. The design needed to be capable of absorbing and dissipating energy in the marine environment without moving. It would need to withstand not just the normal tidal and current flows, but also major storms and the dynamic energy impacts that accompany them.

Reef balls are the only designed reef materials that, from the beginning, were designed to replicate the natural substrata that Mother Nature uses for her reef development. The material needed to be friendly to the marine environment. It would have to be made of natural materials that would attract and encourage micro-organisms to settle and propagate on the new reefs.

Patented mold systems were developed to create reefs that closely mimic natural reef formations. Special design features were included to make it easy for sea life to attach and grow on these designed reef structures. A specialized concrete formula brings the pH content of the reef ball close to neutral. With the neutral pH content and a textured outer surface, the reef ball is the perfect medium to allow the micro-organisms (those little buds of life floating in the currents looking for a home) a place to land, burrow in and mature, and start to propagate before predators can feed on them. Reef balls were born.

In 1992, the Reef Ball Development Group and Reef Ball Foundation completed the first reef ball project near Ft. Lauderdale, Florida. Since that time there have been more than 5,000 projects in more than 70 countries with more than 750,000 reef balls placed on the ocean floor. With years of documented history of stability and habitat development, reef balls have become the international gold standard for fisheries programs, coral restoration, and habitat development projects. In 1998, Carleton “Petey” Glen Palmer, Don Brawley’s father-in-law, talked about having his cremated remains put in a reef. As Carleton put it, “I can think of nothing better than having all that action going on around me all the time after I am gone. Just make sure that the location has lots of red snapper and grouper.” Shortly after Carleton made this request, he passed away.

“Until the funeral director put his remains in my hands, I had forgotten about this casual conversation we had over dinner,” Don Brawley recalled. He quickly set to work mixing his father-in-law’s cremains into the reef ball concrete,  adding to a placement planned in Sarasota, Florida. On May 1, 1998, a reef of ten Nautilus & twenty Aquarius Eternal Reefs were cast –including Petey’s reef, the first Eternal Reef. The reefs were placed on the ocean floor shortly afterward, creating a beautiful, natural memorial setting. Carleton got his wish, and his reef is now teaming with sea life. Eternal Reefs was born. People soon started hearing about Eternal Reefs and it has grown organically ever since. Now, working closely with a host of federal, state and local regulatory agencies, Eternal Reefs has grown to be a choice made by many when selecting their final resting place.

The reasons for choosing an Eternal Reef as a final memorial are as varied as the individuals and families making the choice. Rather than passing an urn down to future generations or taking space in a cemetery, this memorial is a true living legacy offering permanent benefit in the marine environment.

Military veterans, environmentalists, fishermen, sailors, divers and people who have been active all their lives or whose lives have been cut short, are comforted by the thought of being surrounded by all that life and action going on around them.

As Don’ wife and Petey’s daughter Jane said: “It’s not so much like they are gone, it’s really more like – look at what they’re doing now.”